For individuals with intractable headache, ketamine may provide acute and longer-term relief.

Ketamine is a dissociative agent with amnesic, analgesic, and anesthetic properties. Ketamine is a racemic mixture consisting of 2 mirror image molecules: R- and S-ketamine. Racemic ketamine is a schedule III controlled substance approved by the Food and Drug Administration (FDA) for induction and maintenance of general anesthesia. Esketamine, an S-ketamine enantiomer nasal spray, was approved by the FDA in 2019 for the indication of treatment-resistant depression in adults. Use of ketamine historically has been limited because of adverse effects noted by individuals recovering from ketamine anesthesia. This experience, known as emergence phenomena, may include hallucinations, delirium, “out-of-body” experiences, and “near-death” experiences.4 Ketamine has addiction potential and has been abused as a street drug.

Ketamine has a high lipid solubility that allows rapid passage across the blood–brain barrier. Ketamine metabolites are conjugated and excreted in the urine. Noncompetitive antagonism at the NMDA receptor calcium channel inhibits the effects of glutamate, the major excitatory neurotransmitter in the central nervous system (CNS). Ketamine can block muscarinic acetylcholine receptors, resulting in anticholinergic symptoms such as hypertension, tachycardia, and bronchodilation. Ketamine may potentiate GABA inhibition and affect various voltage-gated receptors, which may explain some of the sedating effect of ketamine.5 Ketamine is thought to mitigate pain, at least partly, through its complex interaction with mu and kappa opioid receptors, although ketamine affinity for these receptors is almost tenfold less than for the NMDA channel.6

Glutamate in Stress and Migraine

Several studies have found links between enhancement in glutamate transmission and dysfunction in glutamatergic neurotransmission in models of acute and chronic stress.7 The body’s response to and ability to cope with stress plays a role in both affective disorders (eg, depression) and chronic pain disorders (eg, migraine and complex regional pain syndrome [CRPS]).8,9

Multiple studies have posited a role for NMDA receptor activity in migraine physiology, leading some to speculate that migraine is a state of altered brain excitability.11,12 Increased levels of glutamate have been reported in the blood and cerebrospinal fluid of people with migraine both during and between attacks.13-15 Use of common migraine preventive therapies, such as topiramate, propranolol, and amitriptyline, for a duration of 8 weeks, reportedly reduced plasma glutamate levels as compared with levels in individuals with migraine before preventive treatment.16 Glutamate also appears to play a primary role in cortical spreading depolarization (CSD), believed to be the physiologic basis of migraine aura. CSD is associated with a rise of glutamate into the extracellular space, which subsequently acts on presynaptic NMDA receptors to elicit further release of glutamate. Multiple NMDA receptor agonists that inhibit glutamate receptors inhibit the propagation of CSD.17,18

Ketamine originally was designed to be used as an anesthetic, but clinicians frequently use ketamine for off-label indications, including depression, status epilepticus, headache, and pain. In this review, we focus on the use of ketamine for headache. In most cases, ketamine is a second-line or third-line treatment for disorders refractory to conventional treatments.

Low-dose ketamine has been established as effective for treatment of pain in the acute care setting.20 A clinical trial reported intravenous ketamine 15 mg bolus followed by 20 mg infused over 1 hour provided acute relief of traumatic pain, abdominal pain, sickle cell pain, and musculoskeletal pain.21 In another study, low-dose ketamine in the acute care setting reduced opioid use by 26%.22

In addition to the relief of acute pain, ketamine has been used for the treatment of intractable cancer pain.23,24 Mucositis, a common complication of chemotherapy, can be treated with ketamine mouthwash.25 Studies on chronic pain have reported that treatment with ketamine reduces opioid use.26,27 Ketamine is also used to treat CRPS, although evidence for efficacy has been reported as of moderate to low quality and variable.28,29 Ketamine has been reported to be safe and effective in treatment of neuropathic pain from combat injuries.30

Few studies investigating the efficacy of ketamine for headache have been published (Table 1). A single dose of intranasal ketamine 25 mg compared with midazolam reduced the duration of prolonged aura.31 Considering the bioavailability of ketamine, this was a mean dose of approximately 10 mg, which is lower than what is typically used for pain treatment. In 2 retrospective studies of ketamine for the treatment of refractory headache, which included individuals with chronic migraine, continuous subanesthetic doses of intravenous ketamine reduced headache severity acutely when dosed from 0.1 mg/kg/h to a maximum of 1 mg/kg/h titration based on drug tolerability.32,33 In a small 3-week randomized crossover placebo-controlled study, treatment with subcutaneous ketamine 80 mg in the outpatient setting provided acute pain relief and decreased frequency of attacks.34 In a similarly sized double-blind, placebo-controlled study of intravenous ketamine (0.2 mg/kg) for treatment of migraine in the emergency department setting, however, ketamine was not superior to placebo for acute pain relief and caused adverse effects of generalized discomfort at 30 minutes and fatigue at 60 minutes, although no serious adverse events occurred.35 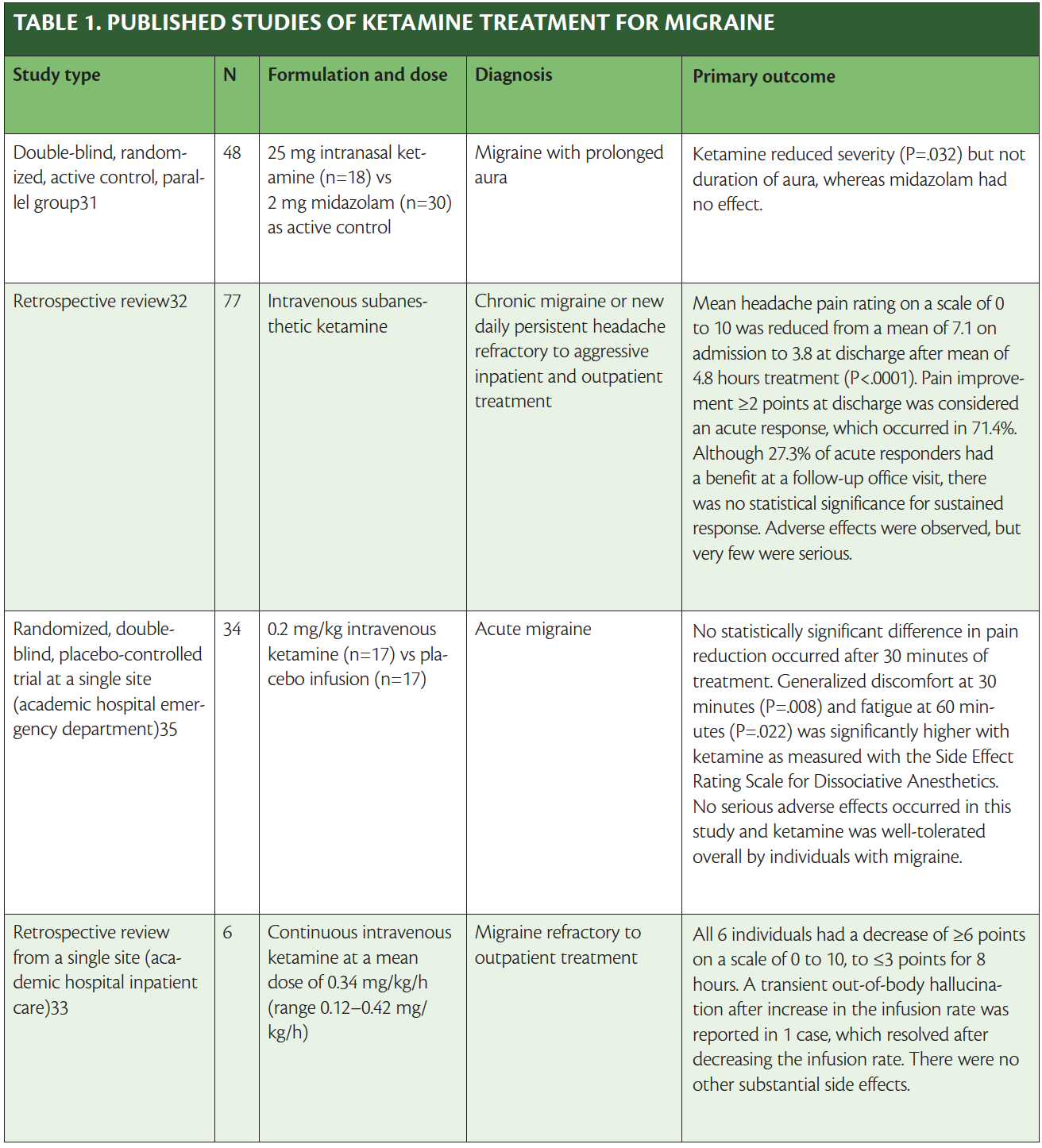 Treating Headache and Pain with Ketamine

Before considering treatment for migraine or chronic pain, physicians should review potential risks and benefit of the treatment. In some cases, ketamine may not be appropriate (Table 2). It is essential to review treatment expectations, possible adverse events, the potential for addiction, and alternative treatment options.

In the inpatient setting, a continuous ketamine infusion can be initiated at 0.1 mg/kg/h and increased by 0.05 mg/kg/h hourly up to a rate of 0.25 mg/kg/h or until pain relief, nystagmus, or mild inebriation occurs. The rate of 0.25 mg/kg/h is maintained for 6 hours to assess for side effects before further dose increases up to a maximum rate of 1 mg/kg/h infused continuously for a maximum of 5 days.

Adjunctive medications include benzodiazepines for anxiolytic effects, antiemetics, nonsteroidal anti-inflammatory drugs (NSAIDs), steroids, and transdermal or oral clonidine to counteract potential elevations in blood pressure and reduce sympathomimetic side effects such as anxiety, agitation, or paranoia. Although concurrent acute therapies for migraine are not contraindicated, some treatments including triptans and dihydroergotamine may also increase blood pressure and are not typically recommended for concurrent use with ketamine.

Individuals receiving this ketamine titration protocol are managed on a telemetry floor with standard monitoring by experienced nursing staff familiar with the treatment. This is only one example of an inpatient ketamine infusion. These infusion regimens are not standardized and vary in duration, total dose, and frequency of treatment.

The effectiveness of ketamine for depression and intractable pain has led to a rise in the number of outpatient treatment programs (>500 in the United States). Outpatient ketamine infusion is not standardized and variations in duration, total dose, and frequency of treatment make it difficult to assess which protocol is most effective.

A study in the Netherlands reported a median starting dose of 5 mg/h and median maximum dose of 27.5 mg/h for individuals receiving a 4-day mean duration of treatment.36A survey of pain medicine physicians in France suggests a protocol with a dose range of 0.5 to 0.9 mg/kg/d for 4 days.37 Treatment for CRPS, ranging from 40 mg to 80 mg infused over 4 hours daily for 10 days, with supplemental oral clonidine 0.1 mg and midazolam 2 to 4 mg for increased tolerability, was successful, with outcomes of improved mobility by day 10, reduction in the number of individuals experiencing pain by day 10, as well as a reduction in the level of their worst pain.

Although ketamine has promise, several potential adverse events must be taken into consideration during individual selection and monitoring of treatment.

Ketamine-induced emergence phenomena are among the more common side effects of ketamine, reported to occur in 10% to 20% of people treated with ketamine.38 Emergence phenomena have been described as a constellation of symptoms including delirium, hallucinations, vivid dreams, and euphoria, as well as negative symptoms such as blunted affect and paucity of speech.39 Emergence phenomena quickly resolve within minutes to hours of discontinuing treatment. Inebriation while under the effect of ketamine may occur and includes emotional lability, difficulty moving or speaking, slurred speech, dissociation from reality or one’s body, and visual distortions. Ketamine inebriation at high doses has been commonly called a “K hole” and coming out of that state may often feel difficult for the individual. Special attention must be paid to individuals with a history of posttraumatic stress disorder as ketamine may resurface past trauma and associated emotions. Ketamine is not appropriate for individuals with a history of psychosis or schizophrenia.

Ketamine often elicits vertical nystagmus and has been shown to elicit other optokinetic abnormalities such as disruption of smooth pursuit.40

Subanesthetic doses of ketamine can cause changes in blood pressure and heart rate through several effects on the cardiovascular system.41 Ketamine can cause a transient significant decrease in intracellular calcium, resulting in a negative inotropic effect.42 Ketamine can also stimulate the sympathetic system, causing the release of catecholamines, suppression of the vagal nerve, and prevention of norepinephrine reuptake.43 Ketamine should be used with caution in individuals with underlying conditions that could be worsened by increased blood pressure (eg, uncontrolled hypertension, aneurysms, aortic dissections, and myocardial infarction).44 Clonidine, a presynaptic alpha-2 adrenoreceptor agonist that decreases norepinephrine release and parasympathetic activity, can be used concurrently to counteract the predicted rise in blood pressure with ketamine administration.

Several studies have reported elevated liver enzymes in people who received anesthetic or subanesthetic doses of ketamine. Use of ketamine for anesthesia has been associated with self-limited mild enzyme elevations, but not with clinically apparent liver injury, although chronic or intermittent use has been associated with biliary dilation and irregulaties.45 A recent case report describes 2 individuals with elevated liver enzymes within 2 days of starting a subanesthetic ketamine infusion. In both cases, liver enzyme levels returned to normal ranges within a few weeks.46 Although the mechanism of ketamine-induced liver injury has not been established, both immune-mediated and nonimmune-mediated pathways have been suggested.47 For this reason, it is important to monitor liver enzymes, especially in individuals using ketamine on a chronic basis as well as those receiving high doses of intravenous formulation.

There is growing evidence that ketamine can cause urologic complications, although this is primarily from animal studies and chronic recreational use by humans. Urothelial toxicity is potentially explained by high concentrations of ketamine metabolites in urine. Ketamine-induced cystitis and significant urinary retention have been described and manifested as dysuria, hematuria, and postmicturition pain. Severe ulcerative cystitis has been documented in chronic users of at least 3 months.48 Ex vivo studies have shown that ketamine (1 mmol/L) applied to human urothelial cells generates dose-related cytotoxic effects by inducing the intrinsic apoptotic pathway.49 Moreover, it appears that ketamine or its metabolites induces microvascular changes in the bladder and possibly the kidney, causing an autoimmune reaction against the bladder urothelium and submucosa.50 Studies of esketamine, approved by the FDA for treatment of refractory depression at doses ranging from 0.25 to 0.5 mg/kg, suggest use of single or repeated doses is unlikely to cause urothelial toxicity.51

Because of the various risks described, monitoring during ketamine infusions is common, although the data regarding the findings and need for monitoring vary.52 The Guidelines for Safe Administration of Low-dose Ketamine from the Department of Health of the Commonwealth of Pennsylvania recommend monitoring pulse oximetry, blood pressure, neurologic function, and telemetry (ECG), at a minimum.53

Migraine and mood disorders are highly comorbid conditions, both of which appear responsive to ketamine treatment, which raises the need for more research into the role of the glutamatergic pathway in migraine pathophysiology, as has been done for major depressive disorder and stress processing. Ketamine use for the treatment of refractory chronic headache is a treatment that is being used with increasing frequency, raising the need for long-term safety data and outcomes as well as head-to-head comparison studies. At what point in the course of selecting migraine treatments ketamine should be considered remains in question. Should ketamine be reserved for the most refractory headache disorders or introduced earlier in the treatment algorithm with more liberal use? Another question is how to select those who would benefit most from ketamine. There also is a question of whether ketamine administration should be reserved for inpatient use or can be considered for outpatient treatment with dosing via tinctures, sublingual tablets, lozenges, or nasal sprays.